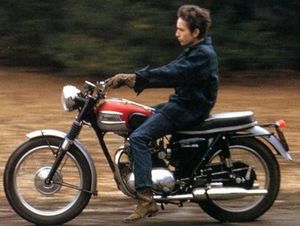 Here I am, marking the day of the release of Vairagya by musing about Bob Dylan.

It’s impossible to either estimate or underestimate the impact he’s had on me as a songwriter. There’s nothing inherently special in this; I know a zillion other people would be quick to claim the same. I’m not a die-hard adherent, like some, and I wouldn’t claim to possess the sort of encyclopedic knowledge about him some folks do. But I definitely went through my Dylan phase, and I’ve definitely drawn a comparison here or there in terms of either this-or-that turn of phrase or, at the very least, the nasality of my voice. I could pass the buck on that, saying, “thanks, shitty sinuses” but the truth is some of those things were pretty well-studied.

And, even after FESS, I can still be something of a snot.

So the irony of celebrating an all-instrumental/electronic record by paying a nod to Bob is hardly lost on me. Then again, Clutching At Straws is coming next out of the chute. Perhaps we can talk about lyrics then. Perhaps we can even explore some Stephen Sondheim together.

Until then, let’s veer hard into Carl Jung for a moment, because I’ve always had strong proclivities there, too. Archetype, Anima, Animus. Alchemy. Collective Unconscious. The Complex and The Shadow. And, yes, Synchronicity.

There were many forces colluding and colliding that prompted my switch to the whole “Jon James Is Dead” thing. I wrote about a couple of them in past posts. Let me tell you, when you traverse the subterranean indie underground, trying to get all those business-y ducks in a row (website, distribution, etc.) can be an outright hemorrhoid. It’s not like you can just have your management people do all the grunt work, John Cougar Melonballer.

As I also noted in a previous post, part of the challenge of being a creative sort means making certain you show up. Consistently. Merely waiting for inspiration to strike won’t quite fill the bill. But then, there are moments of inspiration. Or, if we’re talking about synchronicities, then there’s also conspiration (yeah, I know that’s not a word). You know — things conspiring. And, for me, there’s always this little voice whispering in my ear, whether the angel on the right shoulder or the devil on the left: “follow the crumbs.”

As such, and as I was in the process of bemusing my own death, I came across this article on Bob. And it kind of blew my mind.

“As Dylan asserts, he can never go back to being Bobby Zimmerman no matter how much he might want to revisit his former self, for this is apparently the price one must pay for Transfiguration: it is impossible to unknow something once it has been deeply experienced. Or as Heraclitus expressed it: ‘You cannot step into the same river twice.’”

Or, as my friend Courtney once proffered, in a fantastic song of her own, “it’s the way of the world, and maybe they’re right when they say you can never go home again.”

Thus, as I listened to this oddball instrumental track, struggling to find a title for something that sounded a bit akin to Yacht Rock — a genre into which I’ve assuredly never before dipped my toes — I considered all the strange, baptismal places life takes us; how far we can traverse from anything we once thought we knew, about ourselves, about others, about anything. Simultaneously, here was that Dylan article. And I thought, “yeah — Transfiguration.”